Kelly’s Open Every Day 7am 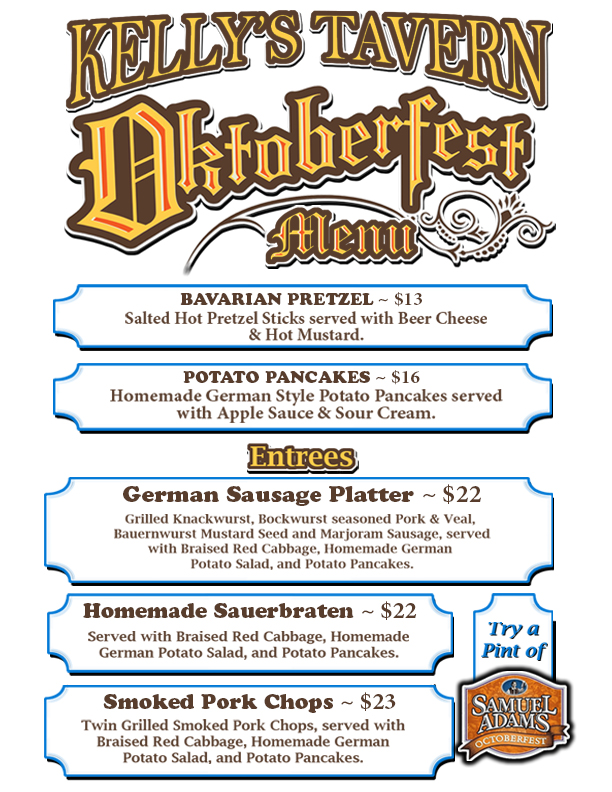 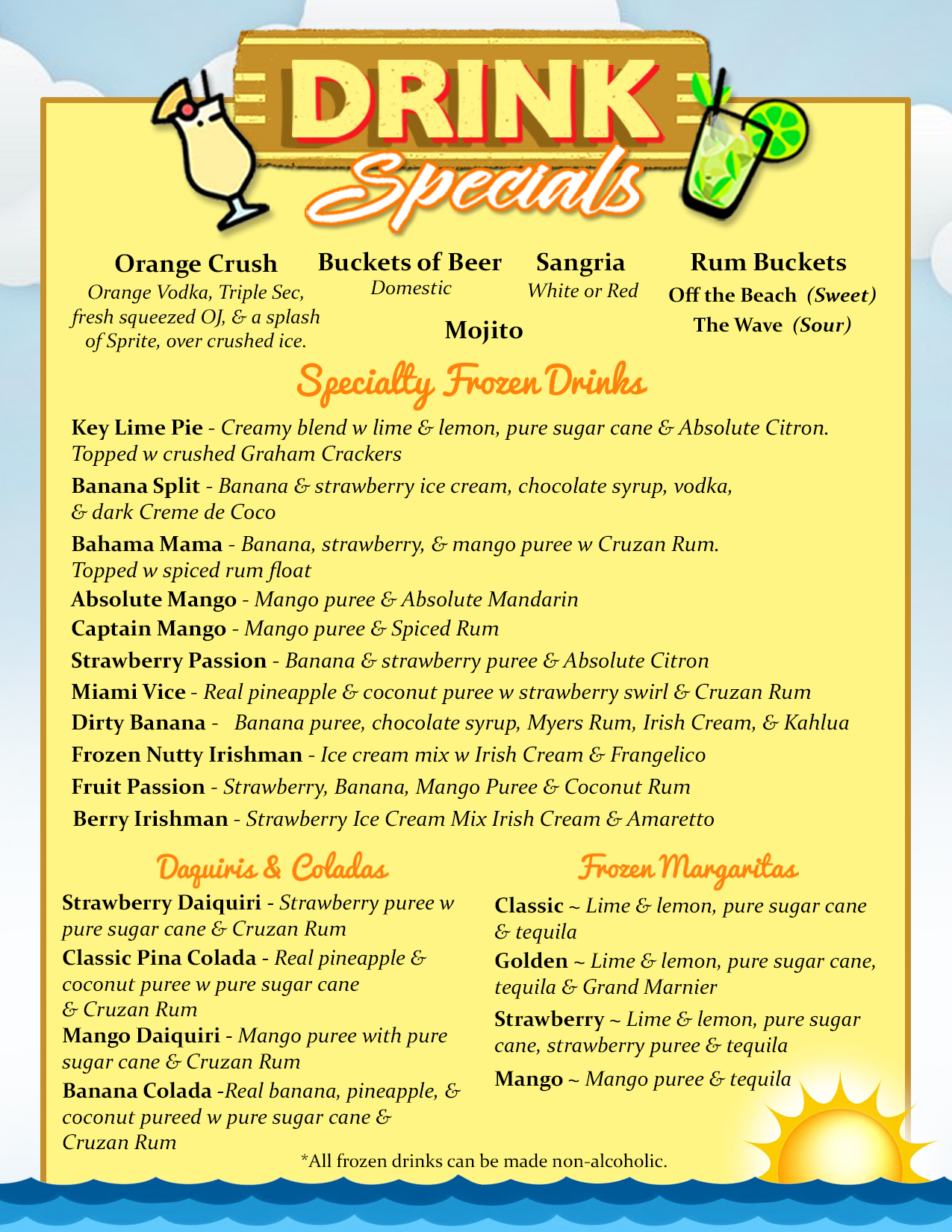 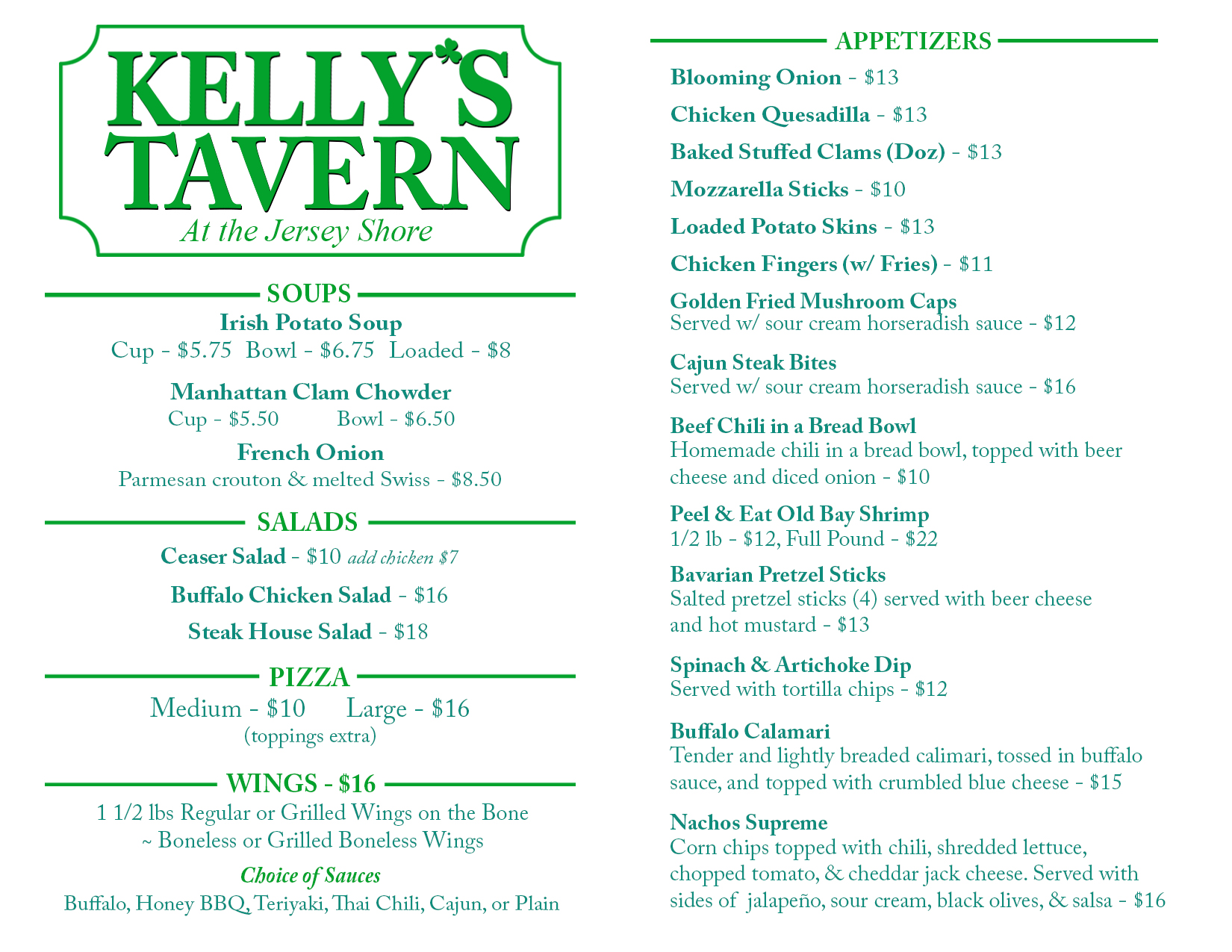 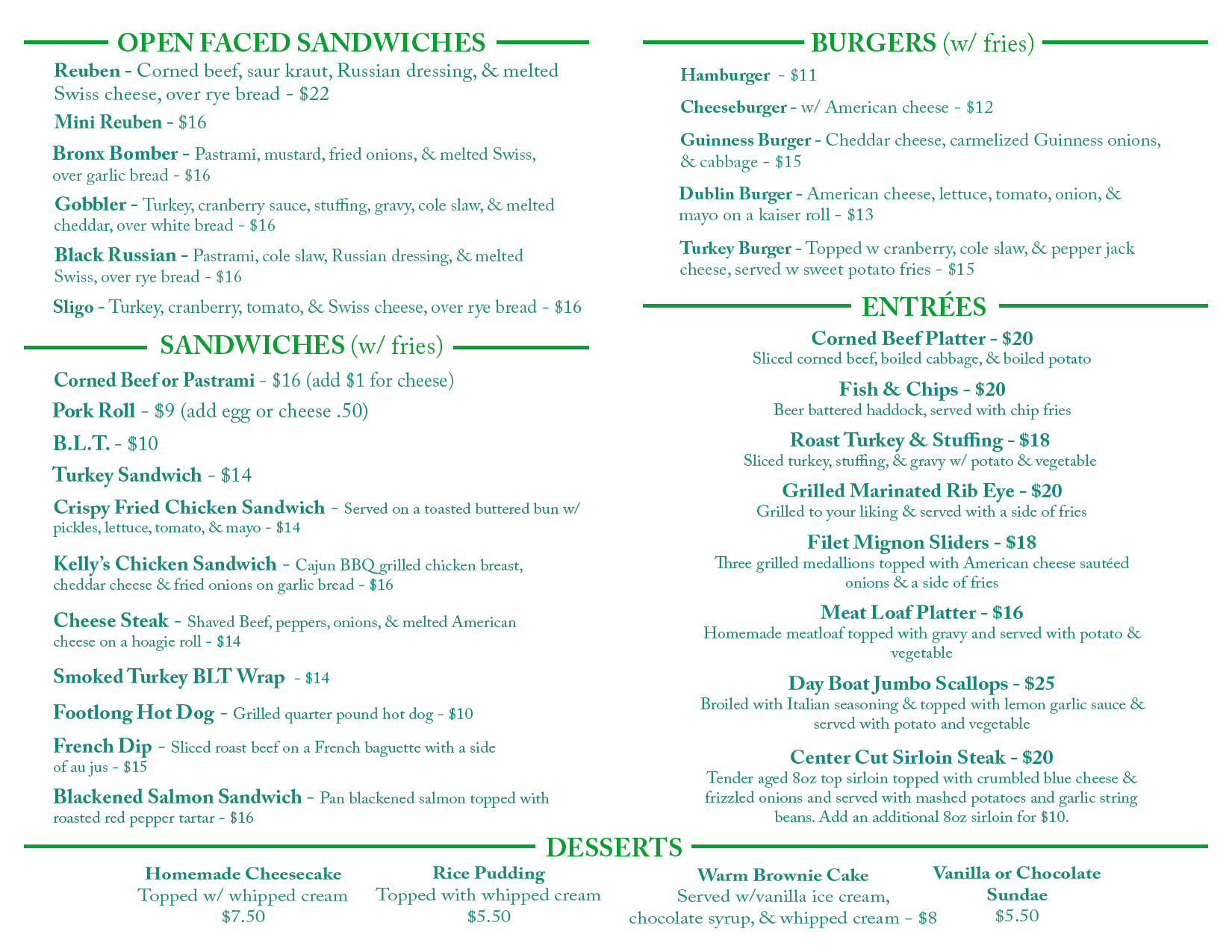 Menu Prices Are for Dining In

To Go Items May Differ In Price

Order Miyako Sushi at Kelly’s: Click here for the menu.

Back in 1949 when Ed Kelly and Mabel Kelly bought Rudy’s Twin Boro Tavern across the highway from where we are today, they never could have imagined that nearly a half century later their tavern would become an icon on the Jersey Shore. When the Kelly’s arrived at “The Shore” the Parkway had yet to be built and “Kelly’s Korner Tavern” was already becoming an institution among the local population. After Mr. Kelly’s death, his son Bill and wife Gerry joined his mother in the family business. By the late 1950′s the business had outgrown the original tavern and in 1959, the present location was opened. When designing the new spot, special attention was given to paying tribute to the Kelly’s rich Irish heritage. The Kelly’s trace their roots all the way from County Monaghan and the town of Clones back on “The Old Sod”. To reflect this link to the past, a large hand painted ancestral map of Ireland covers the ceiling above the oversized bar and authentic banners and coats of arms which were imported from Dublin.

Throughout the 1960′s Bill and Gerry continued to build the business around their loyal following and an ever growing local population, thus establishing themselves as a true “Landmark” here on the Jersey Shore. By the 1970′s Ed and Kevin began taking their places in the ever expanding family business, adding to the dining facilities by way of the Tiffany Room, and enlarging the tavern itself. With the 1980′s came a new full service kitchen and an expanded menu to compliment the world Famous Reuben’s and Corned Beef. While countless others have come and gone, Kelly’s is truly a family tradition.

Beginning with Kelly’s and carried through the employees who are endless combinations of fathers and sons, brothers and sisters, to our patrons from the fifties who now bring their grandchildren, one simple principal remains and keeps our customers coming back again and again… “Good food, Good drinks, Great service”.

Thank you for being part of our Family

Having a Party? Think Tiffany Room

The Tiffany Room is available for banquets and private parties.

We offer a variety of banquet / buffet packages to meet every need and budget.

Perfect for those mid-day gatherings, office parties and repasts. This package is available from 10 AM to 3 PM.  Starting at $19.99 per person.

Excellent for all occasions and is offered throughout the day.  Full buffet options starting at $22.99 per person.

Excellent for all occasions and is offered throughout the day.  Full buffet options starting at $27.99 per person.